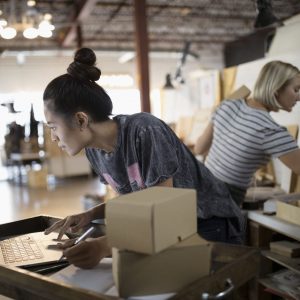 Ecommerce has a number of advantages over retail sales, though it can supplement retail storefronts, as well. Anyone can enter the ecommerce market, selling items they make in their garage or workshop to customers anywhere in the world. However, no matter where you are, governments want their cut of the money in the form of taxes. What are the tax advantages and the tax risks with ecommerce? And how does the increasing collection of sales taxes on ecommerce affect the pros and cons of doing business online?

You May Simplify Your Own Tax Return

If you are a sole proprietor, ecommerce is an easy choice. Simply start making or buying inventory and then selling it online. The profits for your business are taxed as personal income. You don’t have to take the additional steps necessary to set up a retail store front such as getting an occupancy permit, a sales tax permit, and signing a lease. Nor do you have to worry about double taxation of pass-through revenue. A side benefit of setting up an ecommerce site is that you minimize your business’ overhead, increasing the odds you’ll earn a profit and be able to take a salary from the business if you don’t just claim all of the profits as income.

If You’re Starting Small, You May Not Owe Taxes on Online Sales

Ecommerce taxes aren’t really an issue if you are what may be called an “occasional online seller of personal use property”. If you occasionally sell old clothes or DVDs online in the digital equivalent of a garage sale, you’re not going to be hit with a tax bill. In general, if the total sales are less than several hundred dollars, you don’t have to pay taxes on it. And if you’re selling through sites like Nextdoor or Craigslist, no ecommerce taxes like sales taxes are due.

What if you’re a hobbyist? If you are selling items associated with your hobby, you generally don’t have to pay ecommerce taxes. For example, selling a few books through your website or Facebook marketplace is unlikely to result in a tax bill. The very definition of a hobby is that you spend more on the hobby than you make from it. On the other hand, if you’re selling handmade World of Warcraft figurines for ten thousand dollars each, then you will owe income taxes on the sale. If you’re buying and selling expensive collectibles, you’ll owe capital gains taxes if not online sales tax. On the other hand, you could reduce the hassle factor by selling through a site like Etsy that collects and processes ecommerce taxes for you.

The International Tax Forms Are Generally Simpler If Not Unnecessary

You can sell anywhere, anytime, and to anyone. In general, an individual or small business shipping small items to customers overseas don’t have to worry about customs bonds and import duties. If you’re selling to a large foreign business, you might be able to put their value added tax ID on the shipment along with the address and be done with it. For contrast, it would be an incredible undertaking to set up a foreign business entity to sell items in that country under your own name. And joining a local business partner to fall within their legal framework is fraught with risk. Just sell it from your website and ship it to the customer. Then you don’t have to worry about paying foreign taxes. And your customer can be made to pay the import duties either directly or indirectly.

You May Have a Higher Profit Margin on Online Sales

How could ecommerce taxes affect your decision to start selling online? The cost of setting up and maintaining your website was already a business expense as was your digital marketing budget. If you sell your products through ecommerce sites that handle the ecommerce taxes, their fees are a tax deductible business expense. Whether you consider the fact that they handle the taxes for you a fair trade off is a matter of opinion.

If you let Amazon or another order fulfillment service handles the online orders on your behalf, then their fees are certainly a tax-deductible business expense. Yet you may have a higher profit margin on the online sales, because you can ship items from your warehouse instead of expanding the more expensive retail footprint. One point in favor of hiring ecommerce order fulfillment services is that you could move into ecommerce without having to hire additional people. Pay a higher fee, and they handle everything from order processing to shipping. All you have to do is keep them stocked. And these services generally have the software in place to handle city, county and state ecommerce taxes for you.

You Can Use It to Reduce Your Overall Tax Bill

Do you have items you’d like to dispose of without necessarily sending it to charity? Sites like eBay let you sell the item with the proceeds going to charity. All you have to do is fulfill the order when it comes in. This form of charitable giving has a number of advantages. The labor and the shipping costs are standard overhead expenses. The value of the item becomes tax deductible, and the value is established by the price the customer paid. This is far simpler than arguing with an IRS agent that the twenty thousand dollar unsold clothing inventory should result in a 20K charitable donation.

Furthermore, your charitable sales may convince people to buy the item who otherwise wouldn’t interact with your brand. This plus the positive impression they get of the brand from your charitable giving often results in new, loyal customers. There’s also less work on your part. Using the Paypal example, they’ll automatically collect the donation and send it to the charity of your choice. You can switch between receiving charities, if you’d like, to see which associated non-profits result in greater sales of slow-moving inventory. Furthermore, eBay is collecting the relevant ecommerce taxes on the sale, if they’re applied at all to the transaction.

What Are the Tax Risks with Ecommerce?

The internet was originally an open playing field. Anyone could post anything and sell anything. You could receive payment and ship the item. Sales tax collection was on the honor system, though payment processors generally reported income such that sellers tended to pay their income taxes. Many brick and mortar businesses complained that it was unfair, since they had to charge a five to ten percent sales tax whereas someone ordering it online and having the item shipped to their home didn’t have to pay it. While internet sales tax rules were levied in the name of fairness to small businesses, it was also driven by the fact that cities and states all wanted their cut of the growing online sales.

This has made sales tax collection a nightmare, if you’re not selling through a platform like Amazon, Etsy or eBay that automatically collects the sales tax for you and sends it to the relevant authorities. (Note that Shopify and some other sites don’t collect these taxes on behalf of seller.)

Unfortunately, those platforms take a significant cut of the product’s sale price for the privilege of selling on their platform. What if you decide to manage the reporting of ecommerce taxes yourself? The tax software required to do this easily costs several thousand dollars. And you have to track every single sale including where the person lives, if you’re going to generate accurate reports. The alternative is only selling to customers in your home state or in states that don’t charge a sales tax. Now you’re losing out on one of the biggest benefits of selling online – the ability to sell to almost anyone anywhere.

We’re not even going to address the challenges of selling items that may be subject to additional levies and regulation such as guns and herbal remedies.

You May Have Several States Demanding Tax Paperwork

This is a common problem for vendors who travel around the country selling product. If you set up a booth to sell at a trade show, many states insist that you fill out a sales tax registration form. If you don’t return the next year, they may demand that you file a tax return that says you had zero income in the state. After all, you’re in their database and they expect a tax return.

If you do business in Michigan in any way, you will probably have to deal with their tax agency. Michigan has been notorious for attempting to levy Michigan income taxes on people who neither live, work or run a retail location in the state. For example, the Franchise Board tried to collect Michigan income taxes on an Michigan reinforcement for concrete company who had some customers located in California. It attempted to argue that he had a sufficient “locus of activity” to try to require him to pay taxes. That issue is more likely to occur when someone moves from Michigan to a lower-tax state to evade Michigan taxes, and the state uses things like where you work, where your kids go to school and where you spend most of your time to determine if you truly no longer meet residency requirements. Note that you can run into these rules if you have an order fulfillment center or virtual office in another state. The only way to escape it is to run everything out of a single location or hire order fulfillment services that simply shelve your items and ship as orders come in.

Federal law says you can’t have two different authorities applying sales tax or other levies to the same order, but that doesn’t mean they won’t try. For example, if you live in New Jersey and sell a lot of stuff to people in New York, expect New York state to demand its share of the ecommerce revenue. New Jersey could try to tax you, too. Congratulations, you could be audited by two different states for the same sales. And each is trying to collect ecommerce taxes. If you pay ecommerce taxes to one state, you may have to file paperwork with the other state to show that you have collected ecommerce taxes but just didn’t send it to them.

You Cannot Fail to Forward Ecommerce Taxes to the Relevant Authorities

A fairly common mistake small business owners make is failing to set aside enough money to pay their income taxes and ecommerce taxes. Unfortunately, you can be criminally prosecuted for failing to file returns and remit ecommerce taxes to the relevant authorities. Alaska isn’t going to arrest you for failing to send them the fifty dollars in sales tax you owe them, but New York or California could levy your bank account or attach a lien to your property to collect the ecommerce taxes you owe them. You could even be audited by governments to which you don’t owe ecommerce taxes, because they think you’ve sold a lot of stuff to their residents.

If You Are Trying to Sell Online, Your Losses May Be Limited

The IRS says that your business must be earning a profit three out of every five years to be counted as a business. If you set up a website to sell your music, books or webinars and don’t sell anything, your ability to deduct your business expenses is curtailed. Yet you have to collect and remit ecommerce taxes on anything that does sell. Yes, you may be legally obligated to charge and collect 8.5 percent sales on your one dollar eBook.

Note that you also have to pay self-employment taxes, if you want to be able to claim the relevant tax deductions. Yet ecommerce taxes aren’t a tax deductible expense, because it isn’t your money. You’re simply collecting it to send on to the proper authorities. It is akin to collecting the payroll tax and then sending it on to the feds.